State, County and Local Sales and Use Taxes

The City of Aspen is a self-collecting entity, meaning it requires vendors to remit taxes directly to the City rather than through the another entity (most commonly in Colorado is through the Department of Revenue at the State level).  As such, the City requires businesses to use its online portal (MUNIREVS) to file returns and remit payment, with frequency defined as either monthly (most common), quarterly or annually.  The deadline for submitting a tax filing is on or before the 20th day of the month following the month in which the tax was collected.  Even if there are no taxable sales for a specified period, a tax filing should be completed and submitted for each assigned period.

City of Aspen voters have approved both sales and lodging taxes for business done within City limits.  For City sales taxes, portions of these were adopted at varying times, with some extending into perpetuity and others scheduled to sunset unless reaffirmed by voters.  Original adoption dates and current expiration dates (when applicable) are denoted in the following chart.  Note that the 0.50% Sales Tax for Parks and Open Space was re-affirmed by City voters in the November 8, 2022 election and through that process, the sunset date was removed.

City of Aspen taxes are levied in tandem with State, other local jurisdiction and special district taxes.  When combined, the aggregate sales tax rate is currently 9.30%.

The City of Aspen sales taxes collected under the defined rates above were adopted with uses specified by voters to only include the following: 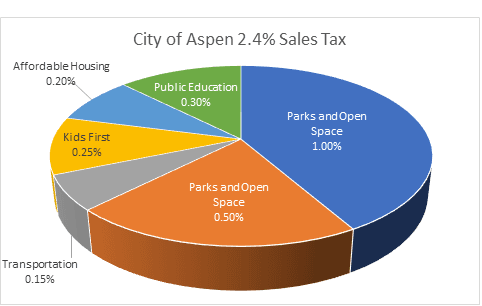 On November 7, 2017, City of Aspen voters approved ballot measure 2B, adding an additional tax on all tobacco and tobacco related products effective January 1, 2018.  The tax was initially established as a 40% tax on all nicotine or tobacco related products or $3.00 per pack of cigarettes.  The per pack tax was however approved with an escalator, ratcheting up ten cents annually until it reaches $4.00 per pack in 2028.

This tax was adopted by voters to influence and discourage the use of tobacco by local youth, and came on the heels of City Council adoption of Ordinance 17 (Series 2017) which raised the legal age to purchase tobacco products in Aspen City limits to 21 years old.  As such, the ballot question included language that specified the tax revenue “shall be used for the specific purposes of financing health and human services, tobacco related health issues, and addition and substance abuse education and mitigation.”

On November 6, 2007, City of Aspen voters approved the application of a 2.1% use tax on all construction and building materials, which became effective January 10, 2008.  This tax is complimentary to and supplemental to sales tax - if the general contractor / owner pays sales tax on construction materials purchased in or delivered to sites within the City of Aspen city limits, an exemption can be granted as double taxation of these materials is not prohibited.

The liability of use tax remittance is shared jointly between the general contractor and the owner of the property.  As such, it is important for both parties to be engaged in the permitting and reporting processes associated with the construction , in order to ensure a timely certification of occupancy and tax compliance process is followed.

Generally, the use tax program can be summarized by the following:

Proceeds from the adopted tax were specifically designated in the ballot question to be used for "the cost of operation, maintenance, capital replacement, and improvement of the City transit service and pedestrian amenities" and are therefore deposited into the City's Transportation Fund.